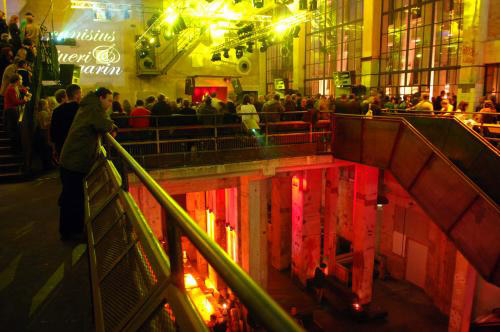 For many years at conferences and in scholarly papers, the prevailing conversation in the world of arts presenters (my world) has been about building audiences, creating unique experiences, thinking outside the box.

Let me tell you about last night in Berlin.

Unwittingly, Bill bought the hottest ticket in town – 27 of them. The production was called Masse and it was produced by one of Europe’s largest ballet companies, the Berlin Staats Ballet. When one thinks “State Ballet” one typically thinks Swan Lake, tutus, princes or in other words, dusty, stodgy relics. Last night, the Berlin Staats Ballet put those ideas into the proverbial blender and hit PULSE and then kept hitting it again and again.

Club Berghain is one of those underground techno-music dance clubs you’ve read about. In fact, chances are it is the techno-music dance club you’ve read about. It’s a destination. Known as the best twenty-something party zone in Europe, it’s not uncommon for customers to arrive in Berlin by plane or train on Friday, get into the club that night and stumble out Sunday afternoon only to catch their return transportation home.

Housed in a huge abandoned coal-fired energy plant that is located in a questionable East Berlin neighbourhood, the club itself has a capacity for 1500. And that’s the small building. The big building, where the ballet was performed, dwarfs the club building with its 55-foot ceilings and massive square footage. In both buildings the ambience is minimalist to say the least: bare concrete floors and walls. The club side boasts two floors with the Panorama Bar located on the upper level. There are no reflective surfaces anywhere but the XTC and other party drugs are everywhere. The techno music provided by house DJs is non-stop and there are plenty of dark corners and back rooms where, well, let’s say, “stuff goes on.”

So imagine the average Berliner’s response when she or he were told that the State Ballet would be performing their next show at the notorious Club Berghain? It sold out in record time.

As we approached the building down a rough path on the night we attended there were at least twenty or thirty people gathered outside the entrance, some holding small handwritten signs, asking if anyone had a ticket to sell. Inside, we entered a huge concrete expanse. The scale of the building was awesome in its own right.

In the low ceilinged entrance hall, the size of your average Walmart, there were twenty or so coat racks behind folding tables and a smiling staff person to the right. It all felt temporary as if it was set up for this evening. Ahead, through a double door was the massive “hall” itself. A patchwork of fractured white ceramic tiles and plumbing that was capped off, adorned one of the walls where a second floor washroom might have been. On the ceiling in another area, giant concrete funnels descended from the ceiling where, presumably, steam created in the giant coal furnaces of the building was ushered forth to power the generators.

After a drink at a makeshift bar we were ushered up some metal stairs to a performance area. Inside there were 600 seats on festival-style metal risers. The stage had been fashioned at one end of the hall.

It was all too “outré” and exciting.

The performance consisted of three 30-minute pieces. All three were choreographed to techno music. The first, despite the excitement of the venue and the experience was trying to hard. The dancers looked precious, conservative, balletic. The men in particular were fey little boys and there was no “why.” By that I mean, it was just choreography. There was no reason for it to be.

The second piece was a different story. I joked with our group at intermission that it was like a broken lava lamp. It started with a dozen dancers in unitards on the floor. As the music developed, the dancers undulated to the centre, limbs loose but heavy as if they were moving through molasses. They congealed in the centre and then limbered off into duets that were sensual – their spine supple as they oozed and slithered across the stage.

At the end of the night, Robin Miller, a dance critic on our tour, and I concurred that the third choreography had a life beyond the Club Berghain. It was packed with unique dance vocabulary – gestures and movement phrases that were fresh and scintillating.

In all the evening was a thrill. On the “S” train back to the hotel, members of our group told us that we had already set the barre very high. The night at the Club Berghain had met all of their expectations of Berlin as a hip, hot, grungy, fetid, creative centre. And the tour had just begun!