One of the ideas that has captivated me since I started travelling many years ago is the defining nature of a city. What is it? How does a city develop a character that is distinct from anywhere else in the world?

It has to be a conflagration of geography, first settlers, latter immigrants, urban planning, industry, economy… No doubt I am embarrassing myself. I know that people like Jane Jacobs , Richard Florida and many others devote their whole lives to the study of cities. My interest is merely amateur. But it is still something that occupies me when I spend a few days in a new city.

When Bill and I construct a cultural tour of a city we give consideration to the many elements the city has to offer and put together what we think will give a traveller a sense of that city’s personality. In Chicago for example we went to the ballet but we also had a night at a gritty blues club. We saw improv. comedy at Second City, toured Oak Park (the Frank Lloyd Wright neighbourhood) and took a cooking class. You get the idea.

In Berlin this year we did the same – offering a wide cross-section of events that would help our group get at the essence of what makes Berlin, Berlin. Bill and I had an added advantage. We went to a place the group didn’t visit.  When they were off at a museum one day, we forayed into a grimy East Berlin neighbourhood that has not been gentrified since the wall came down. It is the epicenter of cool for the 20 something set. We had lunch at a café, a venue that in Victoria might be condemned by the building inspector. The tables were rustic unvarnished wood: the floors a mix of chipped linoleum, concrete and wood planking. The whole place looked like it had been assembled from furniture and dishes found in the street. But, ironically, the food was delicious with an attention to fresh ingredients.

After lunch we walked down the street past generations of graffiti – tags on top of tags on the sides of decaying buildings. At street level there were odd little second hand stores, more cafes, a bar or two. The area was populated with a broad-cross section of people – hipster dykes and queers, grungy musician types – each person seemed fiercely individual – like their clothing, their hair in fact, their disposition was studied. They had made choices. 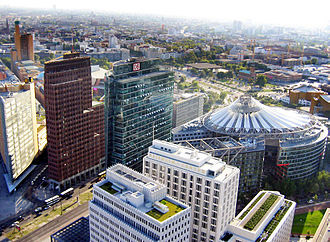 The other part of Berlin (Potsdamer Platz in particular) has been sanitized. The sidewalks are wide and clean. Once a no-mans land that separated east from west, Potsdam is now a massive intersection of gleaming office buildings, a huge shopping centre, sidewalk cafes – a soulless monument to modernity. 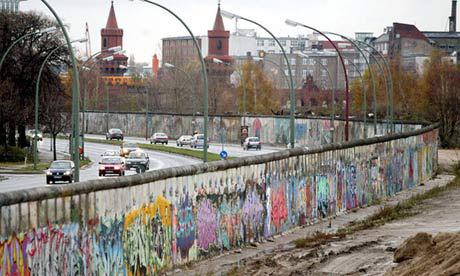 Berlin seems to me and (after discussions) to our group as a confused city trying to be something, but not there yet. One of Berlin’s Mayors famously said the city is “poor but sexy.” It seemed neither to me. Instead there are huge swathes of ugly urban decay next door to wide tree-lined Beaux Arts boulevards. There are some cool elements – the dome on the Reichstag for one and the huge Tiergarten park in the middle of the city, but as for character, we were all left scratching our heads. Part Calgary, part Paris, part post-apocolyptic.  Maybe you have to be twenty something to understand it.  As Gertrude once famously said about California, “There’s no there there.”