A Review by Robin J. Miller

Performances February 7 + 8 during the Night Moves performance series at the Metro Studio, Victoria

Some words you can’t leave out of a review of The 605 Collective and Inheritor Album: intensely physical, fast, urban, youthful, powerful. The Vancouver-based Collective – which is just that, a collective of dancers who develop choreography together – chose the title for this piece carefully: Inheritor Album is about inheritance, who we come from, who we are connected to and who succeeds us, and it’s made up of a series of short pieces that read like the tracks of an album. 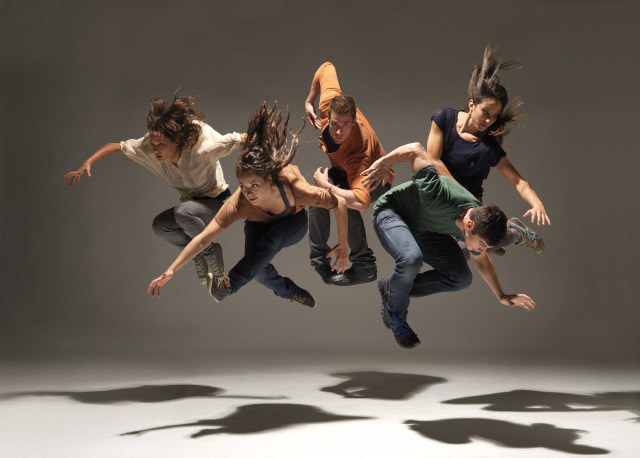 The last short piece is one of the most effective. All six dancers – Laura Avery, Hayden Fong, Lisa Gelley, Josh Martin, Waldean Nelson and Renée Sigouin – dance in a tight group in the centre of the floor. One by one, the dancers leave until only one dancer remains. But wait, there they are, the ones who left – you can still see their shadows. She is not alone after all. As an image of how our friends and families stay with us, it is perhaps a bit literal but it is also touching.

That literalness permeates the piece and contributes both to its strengths and its weaknesses. The dancers find unusual and gorgeous ways to illustrate past history and current connection. In one tremendously effective image, with Waldean Nelson in front and the five other dancers hidden behind him, we see twelve hands surrounding his head and body, like a benign and peaceful Hindu God. In another, the dancers bend over each other’s backs in a line so they all must move as one, and still another, a single dancer, Josh Martin, carries all five of the other dancers on his body, until they slowly detach themselves from him and fall to the floor, one by one.

The movement is carefully thought out and fully supported by Jason Dubois’ lighting and Miwa Matreyek’s animations, which include circles and hands and branches and roots. But by being so literal, the piece also limits its own exploration of inheritance and succession. A little bit of abstraction might open new, deeper, and more adventurous interpretations of what it means to be who we are.

In between effective images, the dancers perform a challenging, viscerally exciting, hugely physical blend of hip-hop, capoeira and contemporary movement that feels bang up-to-date. It depends on lightening speed, the exact balance of weight against gravity and complete trust that your comrades will be exactly where they are supposed to be when you land. It is a movement style that suits the big men of the group, Josh Martin and Hayden Fong, perfectly, but less so the three women who seem too slight both for the men and for the movement. (On February 7th, when I saw the show, the unison was also perhaps just a bit muddy and the movement not quite as tight as it should have been.)

Only Waldean Nelson, not necessarily a small man but more traditionally shaped than the other two for dance, managed to take that aggressive movement and turn it into something that worked for him, too. He provided a beautiful, soulful solo near the middle that brought the whole piece down to touchingly human size.