A Review by Robin J. Miller

Lee Su-Feh, artistic director of Battery Opera, demands a lot of her audiences. What she does often bears no resemblance to dance as we understand it, and her ideas can take what feels like forever to develop. Long silences abound. Your brain has to work hard to make connections and follow her through a journey that you have to trust will be worth it in the end. 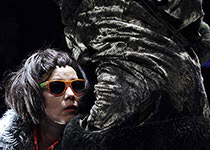 For me, Lee’s solo piece Everything was worth every effort. Her program notes say that here “the dance comes out of a negotiation between what the dancer carries and the surface on which she dances,” and later, that “the piece is both a personal as well as a public ritual of acknowledgement – of who we are and where we are. This is one immigrant’s way of acknowledging the indigenous territory on which she dances.” But she does not so much dance as converse or commune with the objects around her, which hold obvious significance in her life and culture of origin, including I Ching stalks, joss sticks and spirit paper – paper she might or might not set alight.

Every time Lee performs this piece, it will be different, as the objects all have a life of their own, and her movement and relationship to them must change as she releases them to the earth. It’s a wonderful element of pure chance within a carefully choreographed ritual, incorporating a lovely score called “Sequence of Earlier Heaven” by Barry Truax.

The first piece of the evening, Jung-Ah and Su-Feh, was equally demanding of he audience, but less successful. Choreographed by both the Vancouver-based Lee and Victoria’s own Chung Jung-Ah, the piece starts with the two women dressed in wigs and fur coats and animal-striped skirts, apparently pulled from the pile of colourful discards on the floor behind them. They look at us, they look at each other, they say their names, and nothing much else happens for a while. It’s a bit like Becket’s Waiting for Godot – it’s absurd and you’re not exactly sure what’s going on or what you’re waiting for, but they are compelling enough performers you’re content to wait. At least for a while.

Eventually, Su-Feh says to Jung-Ah, “I will dance for you.”  And she does, somewhat stiffly, as at a distance from her own emotions. Later, Jung-Ah says the same thing to Su-Feh. And she does, beautifully and sensuously. She is obviously a very different person from her friend, and yet they are connected. Along the way, both gradually strip off the wigs and the funny clothes until they are down to camisoles and underwear. It looks perhaps like they are moving toward their more authentic selves, but then they put the fur coats back on again.

What does it all mean? I don’t know, but it had something certainly to do with seeing each other and being seen, and something maybe about the kindness of touch when they reach for each other. More clarity about the ideas they trying to express, and fewer passages of agonizing slowness, and it could be as effective as Everything.