In this post, Alina Sotskova discusses the inspiration for the project as well as the event itself.

When I first learned about the world of psychology, I, like many others, was introduced to the work of Sigmund Freud and inevitably found it fascinating. I was about 17 or 16 at the time and have recently moved to Canada from Crimea, then Ukraine, now Russia. Moving to Toronto was a culture shock to say the least. As I struggled to make sense of a new culture, new customs, new meanings for people’s words and gestures, discovering the idea that there is this deep, unknown world inside each and every one of us was immediately compelling. After all, if people did not really understand themselves, and tended to act on unconscious fantasies and family dramas in ways that were not easily recognizable, then it made sense that I also had a hard time understanding these new people in this new country. This original interest eventually led to a pursuit of a Doctorate in Clinical Psychology and I continue to be fascinated by psychoanalysis, although I have gained a much more integrative perspective on psychology. The Rorschach test was one of those mysteries that you learned about as an undergraduate – a test unlike any other where people project their fears, conflicts, wishes, and parts of themselves they don’t even know about onto strange-looking cards.

The Rorschach test appears simple. It is a collection of ten cards, much like this picture seen above, that have been created from ink blots. “What do you see?” or some variant of that question may be asked. The person taking the test usually describes what they see and from the way they approach the test and the way they perceive the ink blots, psychologists can learn much about their emotional life and personality tendencies. You may have even seen the Rorschach (no, not the superhero) in movies or read about it in novels, because the Rorschach has become a cultural symbol of its own. Understanding the nature of the Rorschach is far from simple, however. Now, many years later, I have begun to learn just how complex it is to administer and interpret this test. My experience with it has barely scratched the surface.

Did I forget to mention that I am also a dancer and an artist? So when I look at the Rorschach inkblots, there are three things that I see: 1) the psychological potential and complexity within each person, the marvel that is our internal, hidden world; 2) A measure, a test, which appears as simple pictures on the surface, yet it must adequately represent the complexity of the human beings who participate in this test. 3) Just a pure sense of appreciating the symmetry and the simple beauty in the images; they could be anything. They have been almost everything: “Two children playing soccer.” “A sad horse drinking water.” “My mother scolding me.” “Spilled milk.” Yet they remain one thing: the image. This kind of contemplation sends my thoughts in the direction of Zen: just appreciating the image for the image. 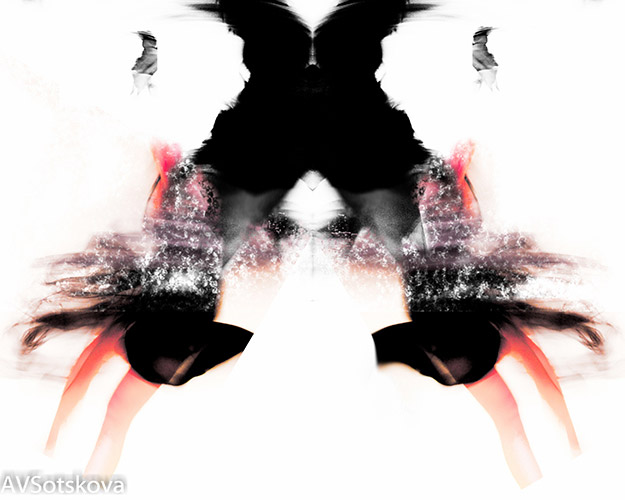 When creating the Ghosts of Rorschach, I thought about how contemporary dance is often similar to a Rorschach ink blot. So much of dance now is interpretive, open to many ways of making meaning of it. It is always one thing – the physical form, the movement embodied by the dancers, yet it can be anything. Much contemporary dance is removed from realism of creating realistic props, sets, or following a concrete story, and is more about the psychological, the emotional, the existential, about a moment in time, not a story for the ages. To me, Ghosts of Rorschach represents that intersection between dance, human psychology, and existentialism that invites the audience to look deeply: at the dance, at themselves, and at the things that emerge from their inner world when they respond to the photography, art, and dance works in this series. This sense is about getting to know ourselves, but also appreciating the parts that we do not know or understand fully, especially the parts that seem strange, macabre, weak, or simply undesirable. When I create each image, I am thinking about integrating all the aspects involved – the beauty, energy, and passion of the dancers from Broken Rhythms who, to me, were the representation of the Muse in the physical form (when we did the photo shoot for this series, their energy was literally electrifying); the different perspectives of two photographers on the original shoot, myself and Ian Sparks; the emotional response within myself and within my imagined audience; and the idea of how looking at ambiguous forms – whether they are dancers’ bodies or ink blots – can pull forward both the existential despair, angst, and loss, and pure existential joy of being alive. To that end, what we most want to encourage at this event is conversation and connection – with yourself and with others around. We look forward to sharing our vision with you in forms of dance, photography, and art. Come, see, feel, connect, discuss with others, and then tell us all about it and maybe new ideas and new potentialities will emerge.